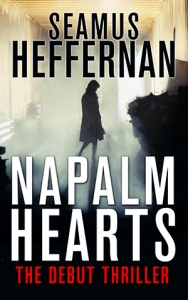 Napalm Hearts “The Debut Thriller” is Seamus Heffernan’ first book. Seamus, originally from Newfoundland and now residing in the local area will read from his book and will discuss and answer questions about the creative process, the genre, and the journey to becoming an author.

As a child, Seamus Heffernan’s parents indulged him far too much in his love of comic books, crime TV and pulp novels, and this is how he has decided to repay them. Prior to his writing career, he worked in education, journalism, marketing and politics, and earned an MA in criminology from the University of the Fraser Valley. Born in St. John’s, Newfoundland, he has called several places home, including a lengthy stint in London, England. He currently resides in British Columbia, where he splits his time between Abbotsford, Mission and Vancouver.

His short fiction has previously appeared in The Raspberry and Louden Singletree. NAPALM HEARTS is his first book.

Thaddeus Grayle is good at his job—but he’s getting a little bored.

Grayle is an American P.I. who has grown weary of snooping after the cheating spouses in his adopted city of London, England. Recently divorced and even more recently sober, he fills what little free time he has with bad take-away, loud music and his own torrid affairs. But when contracted to find a wealthy businessman’s missing party-girl wife, he is thrilled to do what he imagines will finally be some real detective work. Working the case, however, plunges him into the grimy underbelly of a city he though he knew and face-to-face with a bored upper-class at war with their own vices—and the very dangerous men who accommodate them.

Napalm Hearts will appeal to lovers of breakneck paced, cinematic storytelling in the classic noir’ish, P.I. style. It is a detective story, but one that seeks to match its hard-boiled trappings with a deeper exploration of love, sex, loneliness and loyalty.

Lifetime Learning is pleased to participate in Mission's BC Culture Days 2020 A MESSAGE FROM THE BC CULTURE DAYS ORGANIZERS [...]

This class is solely in French and each participant is shares personal stories with the class.  Emphasis is on [...]